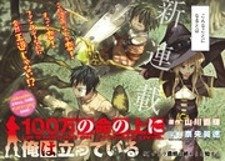 Description:
Etsuya Yusuke, along with his classmates, found himself in an extremely strange and unknown world, which was inhabited by mythical creatures. As soon as they find themselves in this world, they immediately meet a certain creature who calls himself the master of the game. He gives them a quest that needs to be completed in a short time. To help with its implementation, he gives his friends the roles of Magician and Warrior, and for some reason Etsuya himself becomes an ordinary Farmer. Why is it so unfair?
Now their extremely hectic adventure life will begin, as they no longer have a choice and they must complete all random quests, broken into several stages, if they want to stay alive. In addition, their fight allows you to protect the real world from the attacks of demons and monsters that they meet along the way.
Show description

When chapter 73 comes out?