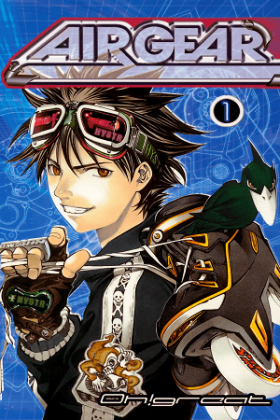 Description:
Tough, rambunctious gangs have cropped up in Japan thanks to the invention of Air Treks that have promoted a sport of aggressive skating. Despite his babyface, Itsuki Minami is one of those punks, and he belongs to the undefeated East-Side Gunz. Between his successful gang life and living with his four gorgeous adopted sisters, it seems like Itsuki’s got it made.

What he doesn’t know though is that he’s about to be tied up in major trouble with the Storm Riders, notorious for their criminal activity that scares away even the police. But just when things seem bleak, he’s saved by his sisters who have been keeping a secret from him… Now Itsuki is thrust deeper into the world of A-T, where he might have a chance to be the next Sky King…!
Show description