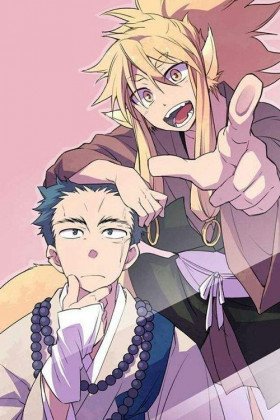 Description:
The two-tailed demon from Mt. Akatsuki, Tobari, is a peculiar demon. He loves humans, and has a dream of creating a paradise where humans and demons can co-exist. Years ago, his human friend Sayuri supported his dream and promised to meet him again.

Now after seeing her one last time, Tobari finally wants to make that paradise a reality. He inspires the priest Reimei, who decides to join him on his quest. But their journey won’t be easy -- opposition and trials stand in their way, from humans and demons alike.
Show description