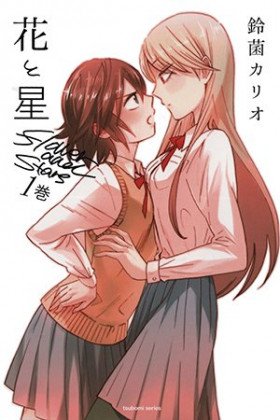 The Flower and the Star

Description:
Hanai is a junior higher and the best at table tennis. She's never lost, and she's won many tournaments, but after some freshman she's never heard of beats her like it was nothing, she starts losing every game after that and she can't get rid of that feeling of defeat. Now it's her first day of high school and she's decided to quit table tennis and live an ordinary high school life, but on the first day, she runs into the very girl that first defeated her.

It turns out that she's also quit table tennis, but this girl always has a cold expression on her face and Hanai can't help but feel that this girl is always looking down on her and trying to mess up her perfect high school life. One day the girl falls asleep in class, and Hanai reaches over to wake her up. As she does so, the girl, still half asleep, looks up at her with a smile and almost kisses her. The girl later tells Hanai that she was having a dream about her, but Hanai coldly brushes it off thinking she's just messing with her and walks away—as the girl behind her looks down while blushing...
Show description