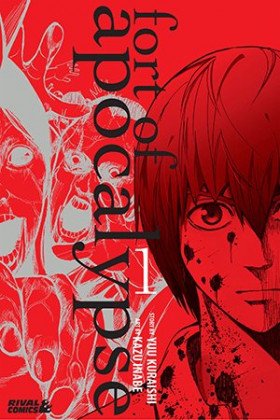 Fortress of the Apocalypse

Description:
Framed and convicted of murder, Yoshiaki Maeda has just arrived at Shouran Academy Juvenile Detention Center. He is placed in Cell 4 and is soon greeted by his fellow inmates Gou Iwakura, Masafumi Yoshioka, and Mitsuru Yamanoi, all of whom have been detained on varying charges and sentences. Already believing life to be laden with misfortunes, Yoshiaki finds, to his dismay, that the prison is in the midst of a violent power struggle.

However, things are about to get even worse—little do the inmates and employees know that the outside world has been thrown into chaos by a sudden zombie apocalypse, and a van carrying infected humans has just crashed into the prison, abruptly introducing them to the undead threat.
Show description