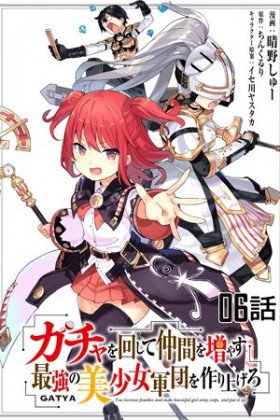 Using Gacha to Increase My Companions and to Create the Strongest Girls’ Army Corps
2.89 (голосов: 9)

Heihachi Okura is a hardcore gacha gamer, willing to spend hundreds to get the characters he wants in his favorite game, “Girls Corps”. One day when doing a normal gacha roll, he gets an item: an “invitation to another world”.

When he uses it, he’s suddenly transported into the world of “Girls Corps,” complete with monsters and summoning his beautiful guide, Norl Fanya! Luckily, Heihachi had played enough of the game to understand how to survive, and now he has the same goal he did in his world: to make the most perfect harem of gorgeous female warriors!
Show description
Loading...