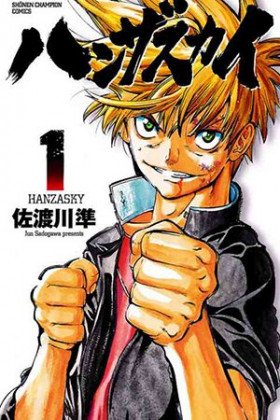 Description:
Hanza Ryunosuke, nicknamed the Blood Dragon, has always been a street fighter. His short temper has him picking fights with anyone and, to top it all off, he has never lost. Now that he's attending Mikado High School, he wants to change his ways and fall in love with a girl. However, he finds it hard to escape from his reputation and none of his classmates want to associate themselves with him.

Then one day, he meets someone significantly stronger than him and, to his surprise, it is a beautiful girl named Fujiki Honami from the Karate Club. Hanza falls instantly in love with her. To his dismay, Fujiki hates Hanza because he uses his strength for violence. In order to prove himself to her and to become stronger, Hanza joins the Karate Club. No one believes he can become good, but they don't know how much perseverance and dedication Hanza truly has.
Show description