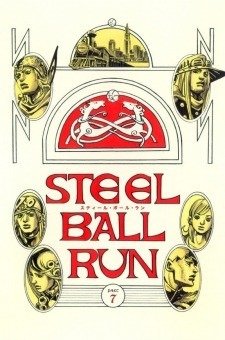 Description:
The greatest race of all time is about to begin in the American Old West. Thousands and thousands of people will come and line up in San Diego to watch the race at a distance of six thousand kilometers. The winner will claim a fifty million dollar prize. After the era of horses came to an end, riders were allowed to use any kind of vehicle that only they could use. Participants must now endure incredible grueling adventures as they travel hundreds of kilometers a day through uncharted wastelands.
One of the main characters of the story is the young Johnny Joestar, who will come here to watch the start of the races. Here he met a racer named Gyro Zeppeli. Gyro's hallmark is the steel balls he wears around his belt. Soon Johnny discovers that they are not only demonstrative, but also have unimaginable strength, because in his eyes he forced the duelist to shoot himself. Johnny accidentally touches these balls, after which he suddenly realizes that he has returned to the ability to walk. Now he wants to figure out what the secret of these balls is. Because of this, he will be forced to take part in the race in order to get answers to all his questions.
Show description