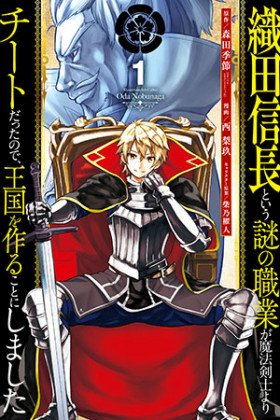 Description:
The young Alrsrod (Arusuroddo), is eagerly waiting for the day that he’s granted a “job” in the temple. In this world when one reaches adulthood, they are granted “jobs” like swordsman or magician by divine revelation, among them the one said to be the strongest is magic swordsman.
Arsrod is the illegitimate second son of a small feudal lord, and the seat is already succeeded by his elder brother who already put him in the front lines, he’s in a position that could lose his life on the battlefield any day. If he became a magic swordsman, a job that was possessed by the famous heroes of the past, he could change his situation.

However, the job that’s granted to Arsrod is not magic swordsman nor any of the other common jobs, it was a mysterious job called “Oda Nobunaga” that none of the temple’s people knew anything about. This job makes one’s battle power become the top-level in the battlefield, gives administration capabilities that allow to turn a small city into a big commercial city and it also elevates the leadership of the troops, becoming a Maou capable of building a country!

Before long, Arsrod defeats his elder brother and becomes the feudal lord. Furthermore, he prepares himself to become a king and build his own country, considering it to be the shortest route to protect the important persons in his life and his people.
Show description

When chapter 9 comes out?