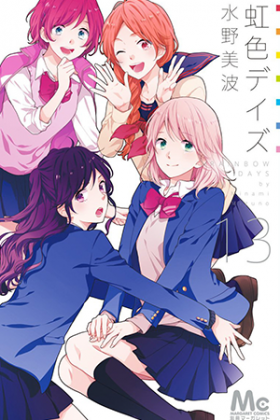 Aru Toshi to Sorekara no Watashitachi

Description:
"Nijiiro Days" follows the daily lives of four high school boys: the hopeless romantic Natsuki Hashiba, the sadist Keiichi Katakura, the playboy Tomoya Matsunaga, and the smart otaku Tsuyoshi Naoe. Even while constantly struggling in their studies, they spend their days goofing around and having romantic misadventures.

On Christmas Eve, however, Natsuki is dumped by his girlfriend. While crying alone, he receives a pack of tissues from a girl wearing a Santa Claus costume, and, in return, gives her the scarf originally meant for his ex-girlfriend. As the holidays end and Natsuki returns to school, he finds out that the girl is named Anna Kobayakawa—who luckily goes to the same school as him! Having fallen in love with Anna, Natsuki aims to get closer to her, despite his friends interfering with his plans.
Show description