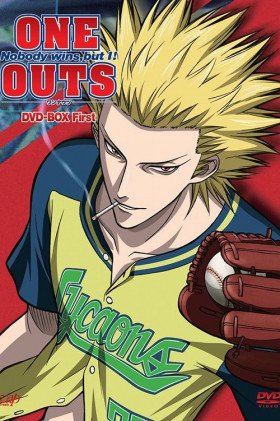 Description:
Toua Tokuchi is a gambling guru and professional player of intellectual games. His record is - 499 wins without losses for the game "One Outs". It's a kind of simple baseball that includes only a batter with a pitcher. Hiromichi Kojima paid a visit to Okinawa where Tokuchi was born. It's the member of the weak baseball team in Japan.
He wanted to make his team win the championship, but there was no pitcher. He was looking for a replacement. To do this, Kojima takes part in "One Outs" game in order to lose to a standard fastball from Tokuchi that seemed to be the strongest opponent. As a result, Kojima invites Tokuchi to his team. He is sure that the guy will bring success to the team. But the greedy Lycaons leader doesn't want to pay him much. Tokuchi gives a strange offer: he wants to get 5 million yen for every pitch, and every loss will make him lose 50 million instead. Tokuchi becomes a part of another gamble - his task is the thing that he does brilliantly.
Show description