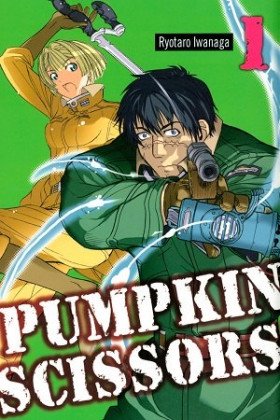 Description:
A long, bloody war raged for years between the Empire and the Republic of Frost -- and now it’s come to an end with an abrupt ceasefire known as the Thin Ice Treaty. Peace should be spreading through the land, but starvation and disease still cling to the country’s wounds that the war left behind. On top of that, former soldiers have now turned to bandits and criminals.

To bring some relief, the Imperial Army Section III -- also known as the Pumpkin Scissors unit -- is established. The unit is led by the fiery 2nd Lieutenant Alice L. Malvin, who one day crosses paths with the former anti-tank trooper, Randel Orlando. With their combined forces, will they finally be able to heal the Empire, and bring true peace to the land?
Show description