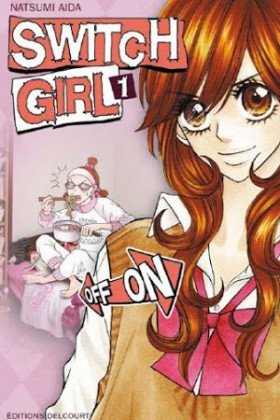 Tamiya Nika is a beautiful, outgoing, popular high school girl. She has just the right look, just the right fashions, and is everyone's friend. What everyone at school does not know is how hard Nika works to keep up this perfect image, and what she is REALLY like at home. When not at school, Nika is a scary, sloppy, tight-fisted girl who wears glasses, an ugly sweatsuit, and has her hair pulled back into unattractive buns. She lays around playing video games and reading manga. Her attitude is bossy and cranky, and she travels far out of her way to shop where she won't be recognized.

Every day, Nika "Switches On" with a strict regimen of beautification that involves primping and plucking and careful dressing. The only person who knows about Nika's Switched On/Off modes is her best friend, who is also aware of the reasons behind the changes.

However, soon a second person finds about about Nika's personalities - someone who has his own On/Off switch, but in reverse! His name is Kamiyama Arata, and he is a recent transfer student. He meets Nika when she is in OFF Mode, and then again at school when she is ON. However Nika can see that he has his little secret. At school, Arata wears thick swirly-eyed glasses and messy hair that make some bullies think he is an otaku. However, at home, he ditches the glasses and is downright gorgeous! He is just the opposite of Nika, but why?
Show description
Loading...