Manga The Death Mage Who Doesn't Want a Fourth Time 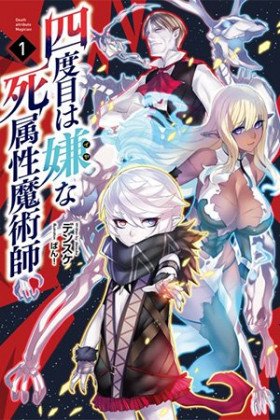 Description:
The protagonist of the story is a guy named Amamiya Hiroto, who has been very unlucky for almost his entire life. His whole life consisted of failures and misfortunes, the result of which was his unfortunate death, when the pleasure boat capsized, and he made an attempt to save an unknown girl. After death, he meets a god who declares that all those who died in this boat reincarnated in a parallel world, and the guy will go after them. The key problem for a guy is that he reincarnates in such a role that his life becomes even worse. As a result, he rather soon dies in the second world and returns to God again. This time he knew that there would be a reincarnation, as it was defined in the relevant laws. However, for the third time, God curses the guy, since he does not want Amamiya to live a happy life. He decides to drive him to suicide. As a result, Hiroto is reborn as a half vampire, half dark elf. Now the guy who finally got the power is no longer going to die, as God intended, but decides to take revenge for all the pain he went through. Therefore, he begins to use his death magic and immense mana to wreak havoc.
Show description

When chapter 38 comes out?