Manga The Flowers of Evil 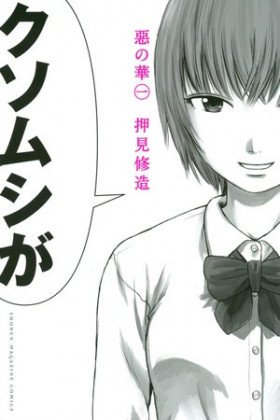 Description:
Takao's Kasuga - the boy who likes to read books, namely Les Fleurs du Mal of Baudelaire. The woman at his school, Sayeki Nanako, is his muse and his Venus, and he admires mom expensive from far away. Once he neglected in a class the copy Le Fleur du Mal and one ran back to select her. In a class he considers not only the book and sportswear of Sayeki. On a reckless impulse he steals her. Now all know that "the any pervert" stole Sayeki's uniform, and Kasuga dies from a shame and fault. Apart from and all therefore the oddest, lonely woman from a class, Nakamura, contemplated as he took a uniform. Instead of and all therefore to open, it was he, she learns his similar spirit and uses the knowledge to keep his life under control. Whether Kasuga will manage to approach Sayeki, despite of Nakamura's intervention and his black secret? What specifically Nakamura is going to do with him?
Show description