Manga The Girl from the Other Side: Siúil, A Rún 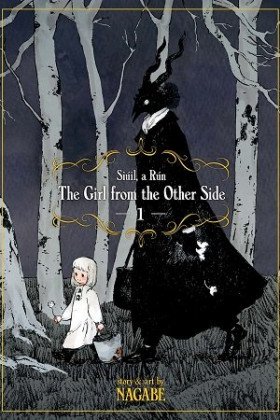 Description:
"This story is full of sadness. From now on let’s read a slow and beautiful story from the past." At one point from the conflict between the Black God and the Snow White God were born two countries broken by a long wall. One side of the wall was "snooty", where ordinary people lived under the Snow White God; the other side was "outside", where those who were cursed under the Black God lived. Shiva, a young woman who likes to walk around the village, lives in an empty village with her guardian, Wendigo as a gentleman she calls "teacher". He forbids her to go out for fresh air, lest she be cursed, but Shiva’s curiosity forces her to yearn for the outside world. What is this curse, and how did Shiva become with his teacher?
Show description