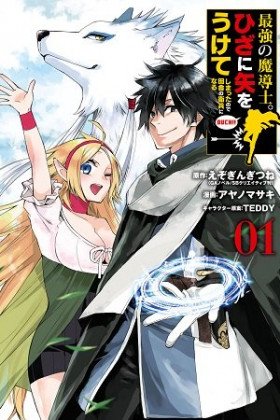 I Used to be the Strongest Sorcerer. Then I Took an Arrow in the Knee and Became a Village Guard

Saikyou no Madoshi. Hisa ni Ya wo Ukete Shimatta no de Inaka no Eihei ni Naru

Description:
Alfred was the strongest wizard, and in the hero's squad he was able to defeat the Lord of Lords. However, he received a cursed arrow in his knee, which somewhat constrained his movements, but he continued to maintain his status as the strongest wizard in the whole world! He is annoyed by the requests that other people fill him with: kill the dragon, become the leader for our squad of knights, help organize the work of the guild. Alfred always wanted the usual calm and quiet, plus it was very important for him to rest and recover, but no one ever allowed him to be LONELY! As a result, Alfred goes to a modest village, which no one knows about, where he is going to recover. However, even here he is pestered with requests: kill the wolves or wild boars. It's a bargain though, as he gets food in return and can rest. Plus, there's a hot spring here! Well, this is a story about a powerful magician of the kingdom who decides to start leading a peaceful human life in the village!
Show description