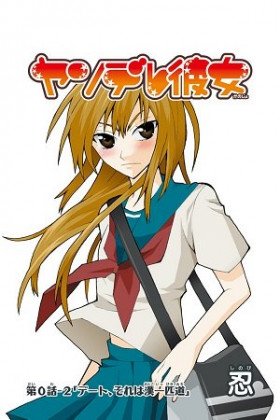 Description:
During a chance encounter, honors student Manabu Tanaka and female delinquent leader Reina Ryuuzaki fall in love at first sight. Manabu immediately asks Reina out, and she agrees only to the condition that they keep their relationship hidden. This is the hilarious story of the unusual love between a model student and his yankee dere-dere girlfriend.

(Note #1: In the title of this series, "yandere" isn't referring to the usual term, but to the "yankee"+"dere-dere" combination.)

(Note #2: “Yandere” refers to characters that are romantically obsessed with someone, to the point of being violent and possessive. “Yankee” is Japanese slang for juvenile delinquents. “Dere-dere” is the Japanese onomatopoeia of being lovestruck.)
Show description