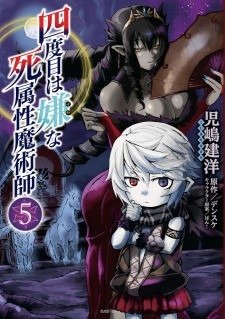 Description:
The protagonist of this story, Amamiya Hiroto, was very unlucky. The fact is that his whole life consisted of continuous failures and misfortunes, the quint-essence of which was his death during a school walk, when he tried to save an unfamiliar girl. After death, he meets the god of reincarnation, who allows him to be reborn in another world, as other passengers of the bus desired him. The main problem was that in his new life, the guy was an even greater loser. Because of this, he also dies very quickly, and again returns to the god of reincarnation. However, now the guy already knew that he was guaranteed to have another rebirth, which could not be stopped in any way. God himself did not want Hiroto to live another life, since in all of them he suffered very much. Because of this, he cursed the guy, hoping to free him. However, this will lead to the fact that in a new life the guy is reborn as a half vampire, half dark elf. Now the guy is going to use all his possibilities, namely the dark magic of death, as well as that huge supply of mana that he got from a past life.
Show description