Manga Your Lie in April 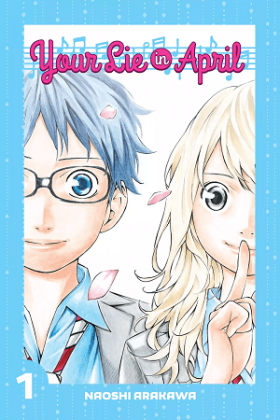 Description:
At a very young age, Kousei Arima was strictly taught by his mother how to play the piano and meticulously follow the score, to the point where he dominated every competition he entered with ease. He earned the title of "Human Metronome" for performing almost perfectly. Every musician of his age looked up to him. However, after his mother suddenly dies, he became tone-deaf due to the shock and then disappeared, never to be seen onstage since.

Two years later, Kousei lives a monotonous life with his childhood friends Tsubaki Sawabe and Ryouta Watari supporting him. He continues to cling to music, although performing is still an impossibility for him. This is until his unexpected encounter with Kaori Miyazono, a violinist who performs freely without the dictations of a score. A story of friendship, love, music, and a single lie, Kousei's life begins to change and gain color as Kaori helps him to take up music again.
Show description